How to train your dragon

by David Gardner
in My Blog info
Leave a comment
I almost fell over when I saw the online charge for the tickets my wife bought to take our three daughters to see the new Dreamworks film, “How to train your dragon.” Not having spent much time in the movie theaters lately, left some sticker shock as to how the prices have gone up in the last 10 years or so. Relying on the world of Netflix has kept my views sheltered.

The three girls were excited to be going to a movie on a Sunday afternoon, the cost having been well worth it for the entertainment value. We found ourselves laughing at certain parts and saddened at others and thoroughly enjoyed our family time together learning “How to train your dragon”. The characters and their voices presented in the film were a perfect fit. The names were especially well selected such as Hiccup, Astrid, Ruffnut and Tuffnut (fraternal twins), Snotlout, Fishlegs and Stoick the Vast to name a few of the Vikings. The dragons portrayed in the movie showed both their tenacious sides where they would terrorize  and attack with viciousness and fire throwing as well as their ability to snuggle up upon one another for comfort.

After his family had battled dragons for years, Hiccup figures out that everything they knew about them was completely wrong. After he takes one down during a battle and finds it trapped and helpless the next day, he realizes that he is unlike the rest of his brethren who want to be the Dragon Slayers and instead he releases the Night Fury he names Toothless, who ironically had plenty of teeth! Due to an injury, toothless is unable to fly away and the process of Hiccup becoming a Dragon Trainer begins. He realizes a little TLC is all the dragons really want and it becomes similar to training a dog. Through careful observation of toothless, Hiccup is able to use items such as a striped eel, grasses and a nice rub on the neck to lull other dragons into a sleep while he is taking classes to become a Dragon Killer, but instead continues to work his “magic” as a Dragon Trainer.

As Hiccup struggles to prove himself to his father, his ability as a Dragon Trainer shows true at the end in the dramatic struggle that takes place that ultimately destroys the “queen Bee” and allows the dragons to live happily ever after with their original hunters. Having completed both my Undergraduate and Graduate degrees at SUNY Cortland, I can see how I would appreciate a movie on “How to train your dragon.” I am a Red Dragon at heart through and through!

In commemoration of this movie, I have designed a Dragon Trainer logo that is available on a number of different mediums and can be seen at http://CafePress.com/BarefootSales 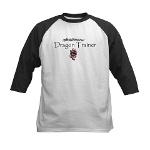