by David Gardner
in My Blog info
2 Comments

Back in the spring of 2012 I made one of the best business decisions of my career in joining the Mike Filsaime VIP Mastermind.  Not only was Mike of course heading this group, we also had some of the top marketers in the world join as well and I immediately saw the value inside in regards to the connections and networks that would be built with this group.

The associations formed and friendships built could be seen instantly when we had our first live event and have continued through our successive events, social media and more.

One person in the group who I had the pleasure spending time with while at our first event was Noah St. John (see picture) 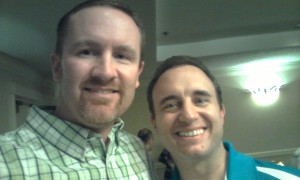 This month, my fellow Mastermind member Noah St John releases his new book from Hay House, The Book of Afformations: Discovering The Missing Piece to Abundant Health, Wealth, Love, and Happiness and it’s an amazing read.

Noah tells the story of how he invented Afformations one morning in 1997. He was in the shower when he asked himself a question that changed his life: Why are we trying to change our lives saying statements we don’t believe when the human mind responds automatically to something even more powerful?

Here are just a few of the remarkable, real-life stories from people around the world who have used Noah’s Afformations Method to change their lives…

Here is Noah sharing his viewpoint on what “Afformations” are:

Where did the word “Afformation” come from?  Noah St. John explains it here:

To find out more about Noah St. John and his newest book, “The Book of Afformations” just click on the highlighted text of the title or you may “click here” if that is easier! Work With Me – Pure Leverage

PS: If Your Upline Does Not Have a Step-By-Step Blueprint For Success, Check This Out (Unless You Already Have Too Many Leads) – Click Here For Instant Access

If you enjoyed this blog, retweet and comment please